The friendliest giant mantas
in the world at Socorro

Up to 10 species of sharks at Socorro

www.NautilusLiveaboards.com
Global Shark Diving members receive 30% off all onboard services on the Nautilus Explorer, Nautilus Belle Amie & Nautilus Under Sea. 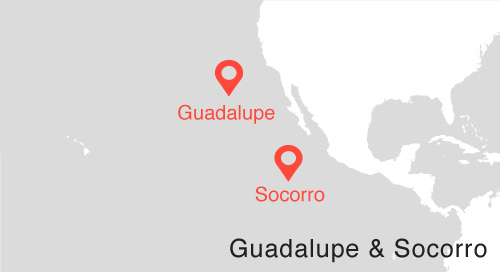 We specialize in big animal diving with great white sharks and the friendliest giant mantas and dolphins in the world. We operate large, modern, steel, ocean going SOLAS safari boats from Cabo San Lucas and Ensenada in Baja, Mexico. Our company was founded in 1992 and Captain Mike Lever has been solidly at the helm throughout the company's evolution from our original 14 metre wooden 8 passenger Nautilus VI to our current state of the art luxury 37 metre and 41 metre "big white boats" and fleet of high speed 7.5 metre RHIBs (rigid hull inflatable dive boats).

When you set off on a trip on the Nautilus Explorer or Nautilus Belle Amie (AKA Where's John), you will experience "adventure" in every sense of the word. You will voyage out to remote volcanic islands in protected marine biospheres that very few people ever experience. Depending on the destination, you can either dive with great white sharks at Guadalupe or giant manta rays, wild dolphins and up to 10 different kinds of sharks at Socorro.

Diving with great white sharks and going face-to-face at 30 feet is an unforgettable experience, and also very different than most people imagine. We believe in natural interaction and instead of using oil and blood and chum at the surface, we use submersible cages with open top decks to descend down to where the sharks naturally congregate. Natural interaction results in more sharks, more interaction and unforgettable up close encounters. July and August features rowdy gangs of male sharks acting just like groups of teenage boys! Female great whites start showing up in September. October and November features the enormous 18 foot dominant females affectionately known as “big momma’s”. Over 171 individual great whites have been identified in the bay that we dive in.

Socorro is all about amazing interaction with our favourite giant mantas. No other mantas in the world behave like this. We don't know why but we LOVE IT!! And the mantas clearly love us back. November and December boast the warmest water temps of the year in the low 80's. Aside from the usual interaction with mantas, dolphins and 10 kinds of sharks, this is the best time of year to see whale sharks in blue blue water and often excellent visibility.


Socorro – First Half of January

Value season!!!! It's always been hard to persuade folks to travel after the holidays so our attitude is "what the heck, let's offer super value pricing". The diving is as good as ever and you can't beat our pricing at this time of year. As always, Socorro is about amazing interaction with our favourite giant mantas. No other mantas in the world behave like this. We don't know why but we love it!! And the mantas clearly love us back. You can also expect interaction with dolphins, 10 kinds of sharks and early season humpback whales. Water temps are usually in the mid - high 70's.

Socorro is all about amazing interaction with our favourite giant mantas. No other mantas in the world behave like this. We don't know why but we LOVE it!! And the mantas clearly love us back. Aside from the usual interaction with mantas, dolphins and 10 kinds of sharks, 1200 humpback whales migrate down from Alaska at this time of year to mate and breed...You will see loads of whales on the surface and you will hear them singing when you are in the water. Most incredible of all is the opportunity to snorkel with the whales and sometimes even see them during a dive. Please note that cooler waters and humpback whales go hand-in-hand and you can expect water temps 73 - 74 degrees.


Socorro – May to July

Bait ball season!!! Socorro is all about amazing interaction with our favourite giant mantas. No other mantas in the world behave like this. We don't know why but we love it!! And the mantas clearly love us back. Research indicates that there are more giant mantas and more biomass at Socorro during bait ball season than any other time of year. Everything intensifies with more sharks - including schooling silky sharks - schooling hammerheads, whale sharks, lots of tuna and other pelagic fish and even pilot whales. You can expect water temps in the mid - high 70's.

In 2010, we purchased an aircraft specifically intended to be used and funded for aerial surveillance and detection of illegal fishing in the Revillagigedo Archipelago. Looking forward, we not only intend to continue making space available onboard at no cost to bona fide researchers and conservationists, but have actually designed capabilities into our newest ship, the Nautilus Belle Amie (AKA Where's John), to include research facilities and the ability to carry extra skiffs and supplies onboard. Please contact us for more information and specifics including the Nautilus Foundation.


Warning: count(): Parameter must be an array or an object that implements Countable in /nfs/c04/h02/mnt/58764/domains/globalsharkdiving.org/html/wp-includes/class-wp-comment-query.php on line 405